My second Muay Thai fight was in May 2012. This was almost 2 and a half years after my first fight. The big gap in between was due to me being a clutz and continually injuring myself! Firstly in 2010 I sprained my ankle out one night, really badly, so much so, that I couldn’t walk on it for almost a month and had to get crutches. Me, being me, didn’t seek any sort of rehabilitation, just continued to try to limp around on it for a few months (including me squeezing my swollen foot into heels and going out dancing still!). By the time I finally saw a Physio, he told me if I had of come in 3 months earlier, I would have had a quicker recovery. So on went the long haul of trying to get movement in my ankle again. Then the next injury was my lower back…I did a “scorpion” whilst doing a cartwheel one night being stupid with my friends (for those who don’t know what a scorpion is, its when you have an accident, almost into a reverse somersault and your feet touch your head – looking much like a Scorpion). Again, I did nothing to aid recovery just continued to act like I didn’t have an injury, then I did the same thing when I fell off my board surfing (well trying to surf anyway) – Double Scorpion! Ow!

Finally in 2011 I was on the road to recovery and started training again. By this time my Gym Masa/Miami Fight Centre had closed it’s doors and one of the trainers, Clayton Collyer went out on his own and formed 350 Fitness. So training begun once again and by May 2012 Clayton had a fight lined up for me on the Gold Coast.

There are 2 fights, so far, that are my favourites. This was one of them. I learned SO much from this fight with Kat, she was super strong and fit…where as my fitness was lacking. Part way through the second round I had used all my energy and was so exhausted. By the 3rd round I had nothing, Kat was so fit and just fighting really strong the whole time. All I can remember thinking in that last round was “WHEN THE HELL IS THAT BELL GOING TO RING” it felt like forever and I was so tired, I wasn’t even really thinking much by the end just wishing for the bell to ring so I could breathe again….this fight also made me realise how important breathing is! I looked like a puffer fish! I pretty much held my breathe the entire fight!

The reason why I loved this fight so much was because of my opponent. Kat fought really well and she taught me so much that night. Not to mention the leg chops on this girl killed my leg. I couldn’t even walk out of the ring on my own and had to get a “Man Chariot” out the back to get around.

From I.T Nerd to Muaythai Fighter

Tell us about your history, where you came from, what makes you tick? I was originally born in Perth. Dad was in the mining industry so we moved around alot so I lived in a few different places in WA.  We then moved to Victoria, where I lived for a few years, before settling in QLD when i was about 9 years… Read more → 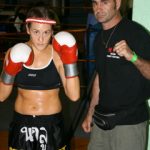 My First Fight – Dec 2009 This is where it all started. My very first fight. It was a few weeks before my 30th Birthday, I had been training for fun on and off for around 5 years. I had not even considered there was the whole competitive fighting aspect to Muaythai. I first started doing martial arts when I… Read more →

by Melina Yung on April 20, 2015 in PHOTOS, Uncategorized

by Melina Yung on September 8, 2014 in PHOTOS, Uncategorized • 0 Comments 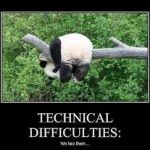 When it rains it pours….bad luck panda

So last night I got a visit from the “Bad Luck Panda”….I had organised a live webinar for NRF members, (a webinar is an online “seminar” or workshop), with Sponsorship Consultant, Vickie Saunders.  Vickie lives in Melbourne and was in Brisbane for a meeting earlier that day, so I had arranged to meet her before she flew out to Malaysia.… Read more →